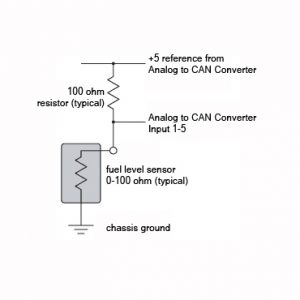 With an empty tank, measure the voltage with each gallon added to the tank (this can be done at a fuel station, or by filling from a measured container). The volts / gallon will be entered in to the device to produce a look up table. Averaging can be applied to reduce fluctuation based on fuel slosh.